DevOps is a mindset, a way of working for an organization so that new features reach to the users as quickly as possible and smoothly too.

There have been discussions regarding how continuous integration and deployment concepts can be applied to the RPA development cycle.

Topics covered in this article – 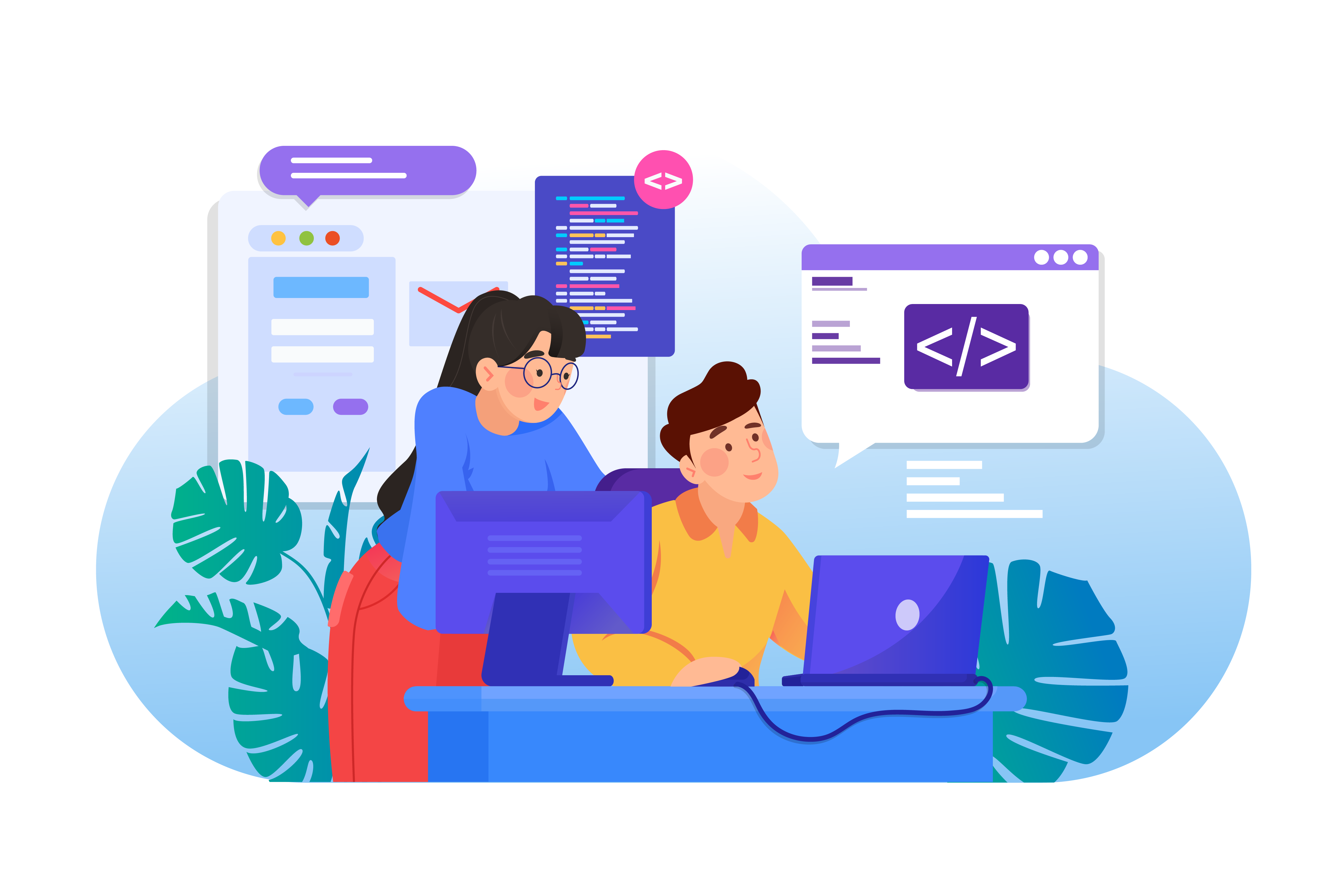 What is a CI/CD pipeline?

Continuous integration (CI) is the practice used by development teams to simplify the testing and building of code. CI helps to catch bugs or problems early in the development cycle, which makes them easier and faster to fix. Automated tests and builds are run as part of the CI process.

The process can run on a set schedule, whenever code is pushed, or both. Items known as artefacts are produced from CI systems. They’re used by the continuous delivery release pipelines to drive automatic deployments.

Continuous delivery (CD) is a process by which code is built, tested, and deployed to one or more test and production stages. Deploying and testing in multiple stages helps drive quality.

Continuous integration systems produce deployable artifacts which are used in CD to release new versions and fixes to existing systems. This process ensures that errors are caught often and early.

Although many organizations have started implementing a Digital Workforce into their business operations – only a few are fully in control of their RPA bots.

A typical pipeline for UiPath can be –

Why should You use Azure Pipelines?

Before I talk about building an azure pipeline for Build, Test and Deploy. You need to understand the basic building blocks of the Pipeline. Such as-

As Discussed above, Azure Pipelines supports continuous integration (CI) and continuous delivery (CD) to constantly and consistently test and build your code and ship it to any target.

How to Set Up Azure DevOps for the first time only

Implement continuous integration and continuous delivery (CI/CD) for the app and platform of your choice require set-up to be done before writing your first pipeline.

You can read more details here – [Signup for Azure Pipeline]

How to Create your first pipeline

At this point of post, I assume you already has setup the organization and projects in the Azure DevOps portal and now you are ready for creating your first pipeline.

In the Azure DevOps project, click on “Pipelines” on the left menu of the page. Click on “New pipeline”. The following window will appear which will ask you to provide the details of your version control system. 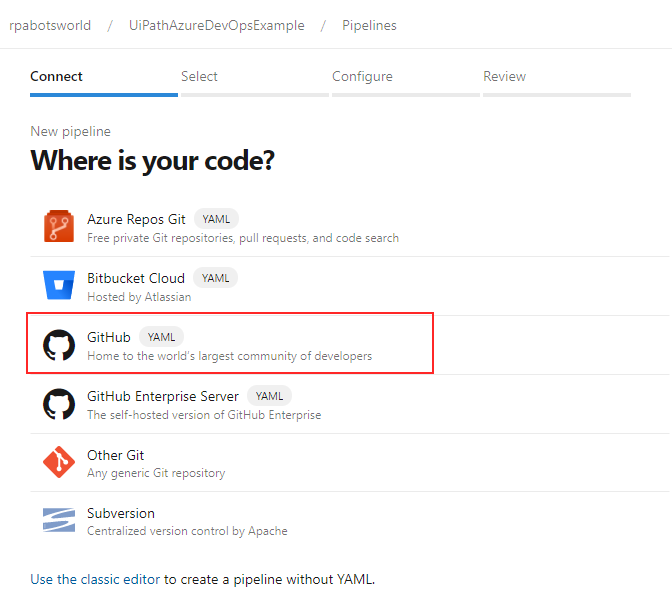 You can select your GitHub repository; it will also ask you to provide access to manage code and other permission. You need to accept and install here. (If you are already connected you can select the project from the dropdown.) 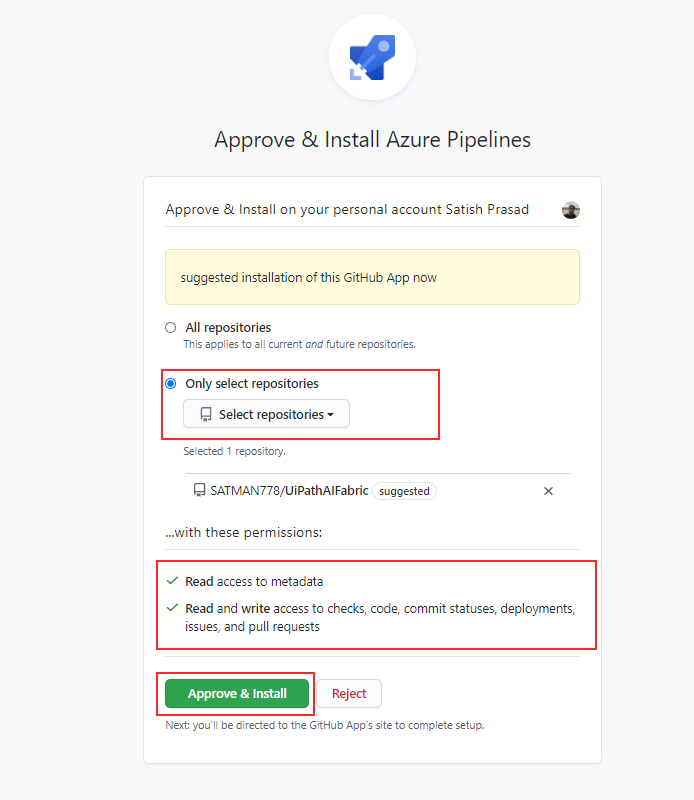 Once access for source code has been granted, you need to specify whether you are going to use.

If you have not created “azure-pipelines.yml” in your source code, you should select the Starter pipeline and edit the required details on the editor.

Copy the below code into the window(by replacing template) and save the file. All we are doing here is using the “UiPathRobot.exe file on the agent to pack the UiPath Project as. nupkg.

The key point to note here is –

So now you are ready to Run the first pipeline.

If you don’t love GUI Steps, You can also use Azure CLI (command-line interface), See more here about creating a pipeline from the CLI(create-first-pipeline-cli ).

Once you run it you will see that “UiPathAzureDevOps.1.0.20201004.6.nupkg” gets published at the work location.

Congratulations! You are done with your first pipeline to successfully build the  .nupkg.

But we are not done yet!

In the real project world, there will be a series of stages which includes various steps in different environment and approval and settings done by your organisation.

And so on…all that I want to convey here is creating a pipeline for UiPath depends on the practises being followed in your organisation.

In the next section,  I will talk about the different ways of creating a pipeline with the help of UiPath Extensions available for Azure DevOps and Via PowerShell Utility.

Many developers have created a pipeline for UiPath and they have also published the template for UiPath Projects and library on GitHub. Which can be utilized to save your effort.

Here are few GitHub repo which can be used to build you pipelines from template.

You can clone the Templates files from above repo to start it quickly.

An AzureDevOps extension is also available that allows you to build and deploy UiPath automation processes, as well as run UiPath automated test cases.

For using the extension you need to install it on Azure by getting it from visual studio market place.(Check uipath.vsts-uipath-package)

For the UiPathDeploy and UiPathTest tasks you will also need to first create a Service Connection. (Enable API Access and set required).

For best practices its required to create multiple tenants such as (DEV,UAT,PROD) and configure them separately.

In the above example, we have used the inline script to build the first pipeline. However, UiPath also provides support for PowerShell cmdlet for all the task you need to perform with UiPath Orchestrator.

This provides a better way in case you are not interested in using the extension and you can use PowerShell cmdlet inside your pipeline to perform the required task.

For example- You can get the UiPath AuthToken using the UiPath.Powershell and then use       Add-UiPathPackage to publish the package on orchestrator.

How to Set up Self-Hosted Build Agents in Azure DevOps

To run a build or release pipeline, a container is used in Azure DevOps to run the tasks in the pipeline. The containers are known as build agents and they vary in use case depending on the type of application being deployed.

In our case, we are using the UiPath Project so we need agents which are capable of building projects and running the UiPath test cases.

For sake of simplicity, you can say that running a UiPath CI/CD Pipeline we need an agent (Build Machine) which have UiPath already installed and configured.

For trying our hands out, we have set up a build agent on Windows 10.

Personal Access Token (PAT) is an authentication method used to authenticate your agent, so the first thing you need to do is navigate to the user profile and click Personal access tokens to access the PAT settings.

Once Downloaded, it can be configured easily, Unpack the agent into the directory of your choice. Then run config.cmd. This will ask you a series of questions to configure the agent.

To add an Orchestrator Service Connection (based on the tenant) 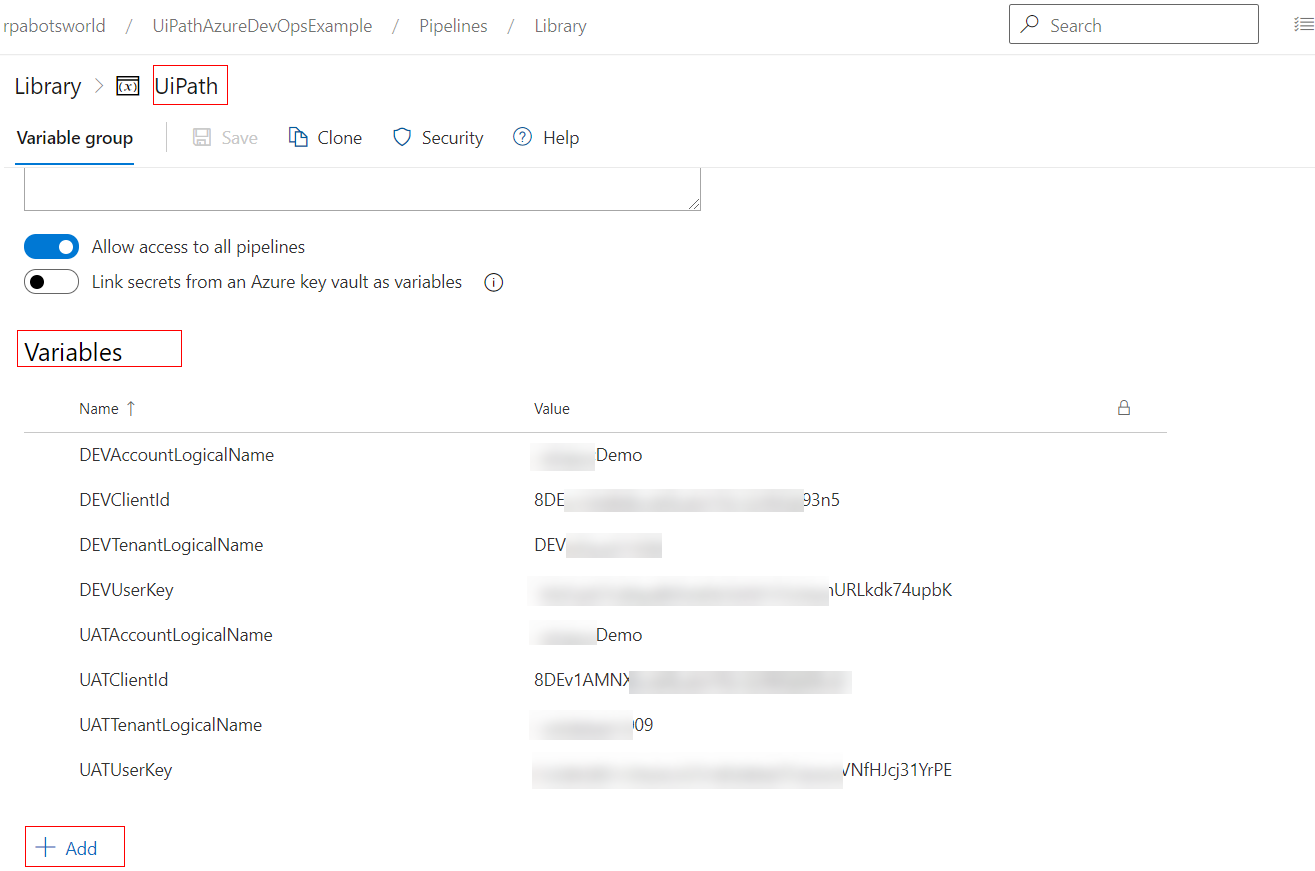 As discussed, Pipelines are the top-level component of continuous integration, delivery, and deployment. In this working example, we are going to create a pipeline comprising-

This example will give you the required information to set up your pipeline. You can add the required stages accordingly.

You can see the details of individual stages by navigating to jobs run details page.

UiPath.PowerShell module is not installed by default so you need to install it using the UiPath repository.

You need to register the UiPath Gallery as a NuGet module provider.

You might face the issue with the UiPath.PowerShell Module as it requires setting the execution policy otherwise it will not work.(see below screen) 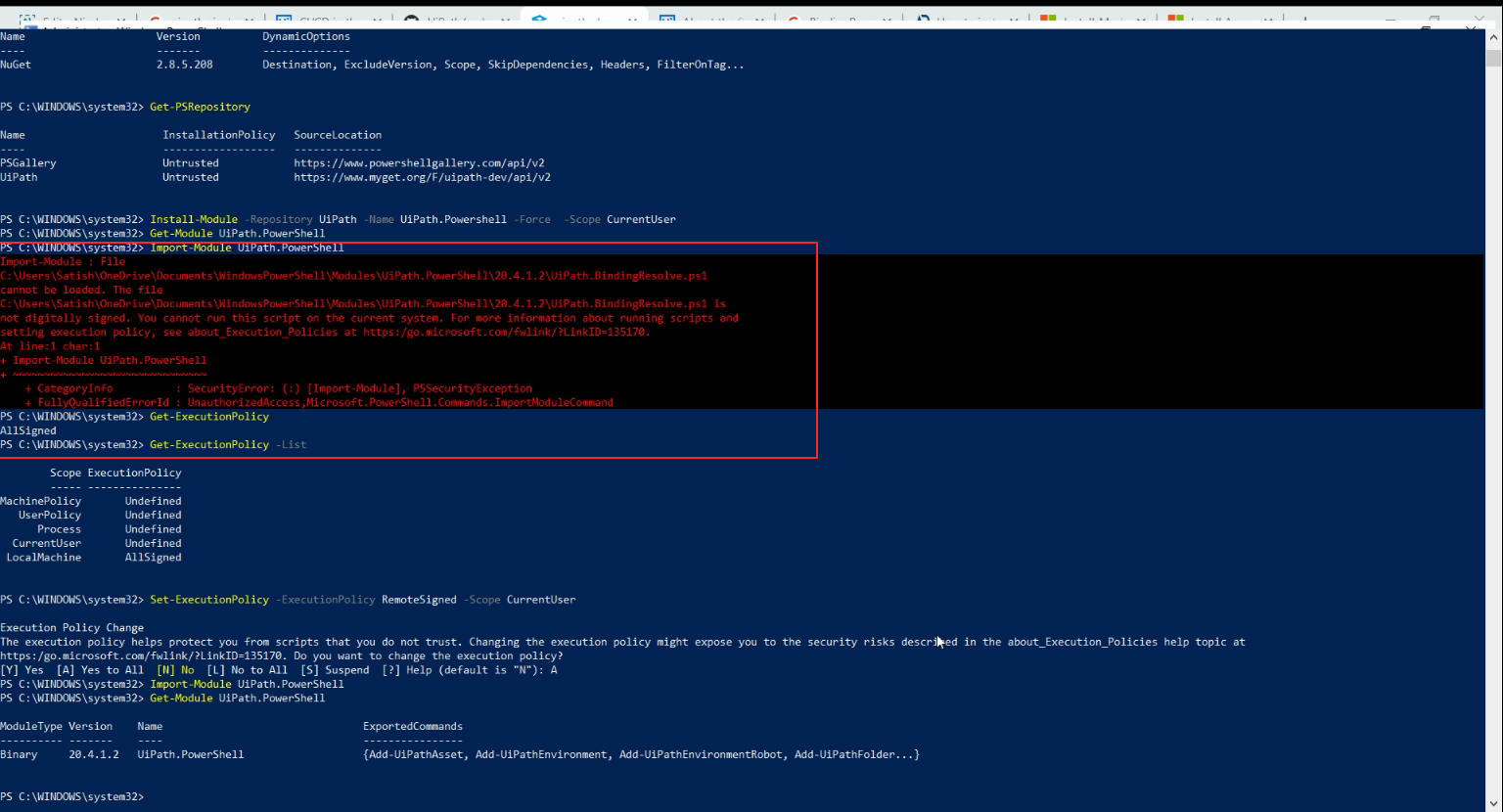 Many teams prefer to define their build and release pipelines using YAML (Yet Another Markup Language). However, you can also try out classic pipeline builder to do it through the portal.

As of now, this post contains a basic working example of build and publish however in real life we need to implement other stuff like creating different config, assets, validating the code, testing and then finally publishing through series of approvals etc.

In the next few weeks, I will be improving this to make this complete.

Any cookies that may not be particularly necessary for the website to function and is used specifically to collect user personal data via analytics, ads, other embedded contents are termed as non-necessary cookies. It is mandatory to procure user consent prior to running these cookies on your website.

SAVE & ACCEPT
Scroll to Top