SAP enterprise software contains GUI elements that are considered one block, which means that they cannot be used with simple recording.

Additionally, SAP operation often involves populating a high no of fields on-screen by copying data from another source such as excel or Copy paste from other applications.

In this article, I have covered various steps required for automating SAP Application Steps, Including the required configuration, Installation step, and best practices.

Some common SAP uses-cases across the industry

Based on Master Data Management

Based on Financial Transaction

Based on Project management

Based on Procurement Management

First thing first, many RPA developers complain that they don’t have an SAP system so they never tried Automating steps of SAP application. However, I would suggest you practice building few workflows to perform automation on the SAP application by leveraging Free Trial Version provided by SAP.

Covering step-by-step installation for free trial SAP is beyond the context of this article, however below are two options available for you to try your hands. (You can search google you will get many step-by-step guides.) For this article, I have used the ABAP Developer edition.

Before you can configure and use the SAP GUI, you need to download the software from the SAP Marketplace. Once you have downloaded and installed the software now, you need to configure it, in most of the cases below details will be provided to you by SAP admin or your IT support to create a connection.

Some organizations follow standard methods where config files are copied to your machine which will auto-populate all the required Connections. [Example Shown Below] 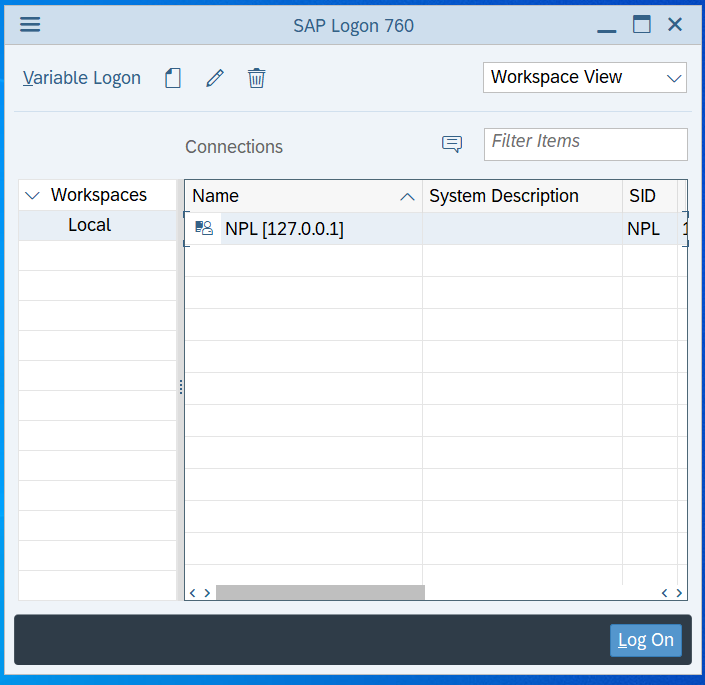 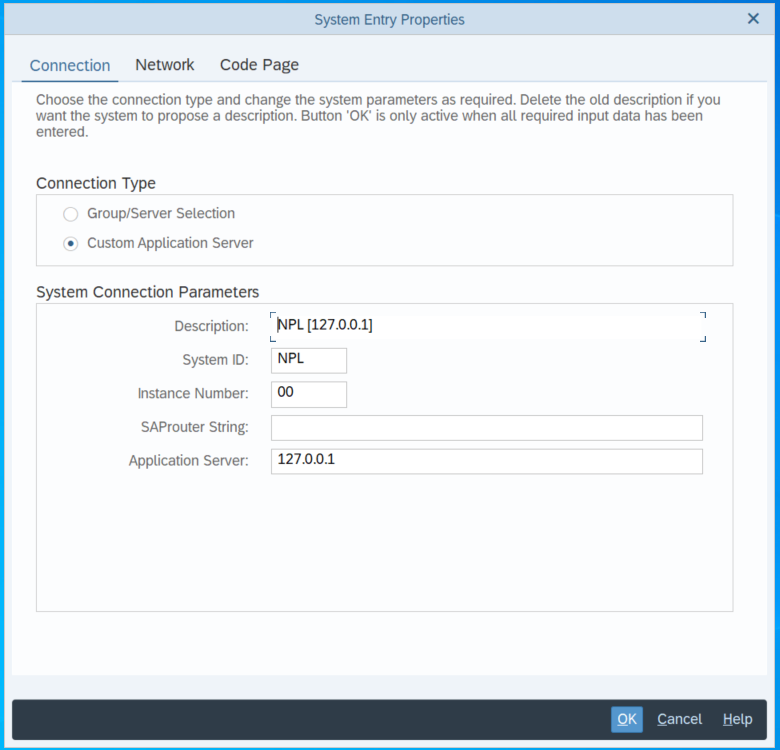 In case you need to create a new connection, you can follow below steps –

The SAP GUI Scripting API is an automation interface that enhances the capabilities of SAP GUI for Windows. Using this interface, end-users may automate repetitive tasks by recording and running macro-like scripts.

From the SAP server’s point of view, there is no difference between SAP GUI communication generated by a script and SAP GUI communication generated by a user. For this reason, a script has the same rights to run SAP transactions and enter data as the user starts it. In addition, the same data verification rules are applied to data entered by a user and data entered by a script

SAP GUI panels are seen as Block if SAP GUI scripting is not enabled, which means you won’t be able to recognize the SAP elements easily. Without this, selectors won’t work on the SAP UI elements. Image and OCR automation can be used instead, but selectors would provide increased accuracy to the workflow.

The following procedure shows an example with a client running SAP Signature Theme on Windows 10, the colors and appearance of screen might differ but functionality should be same in higher version with other themes.

SAP GUI Scripting on the Server-Side

Enabling SAP GUI Scripting on the server-side requires admin privileges and as an RPA developer, you need to contact the SAP system administrator to perform the required changes.

Here are steps Needs to performed – 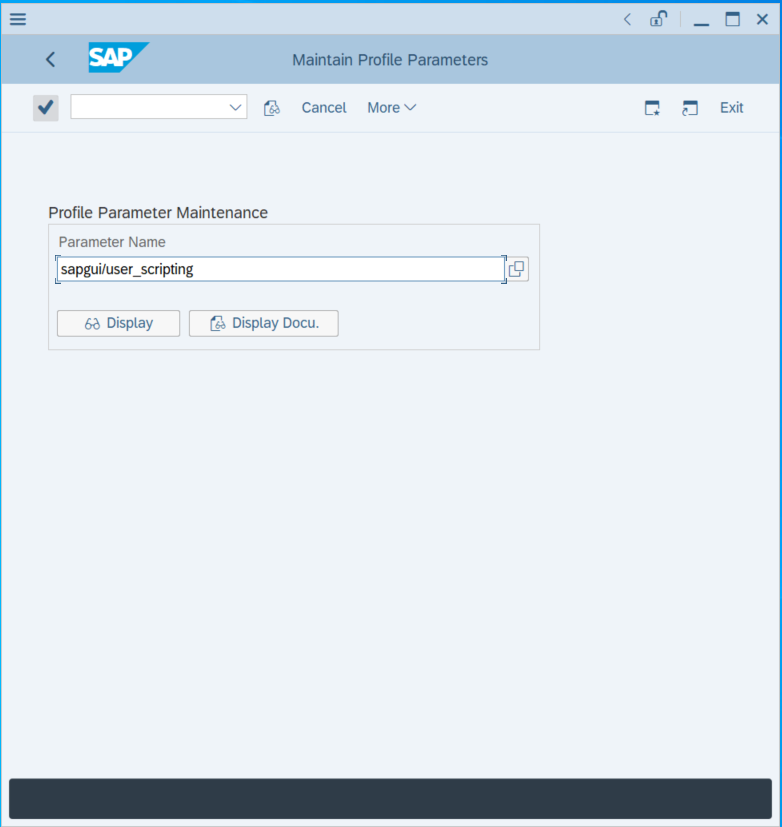 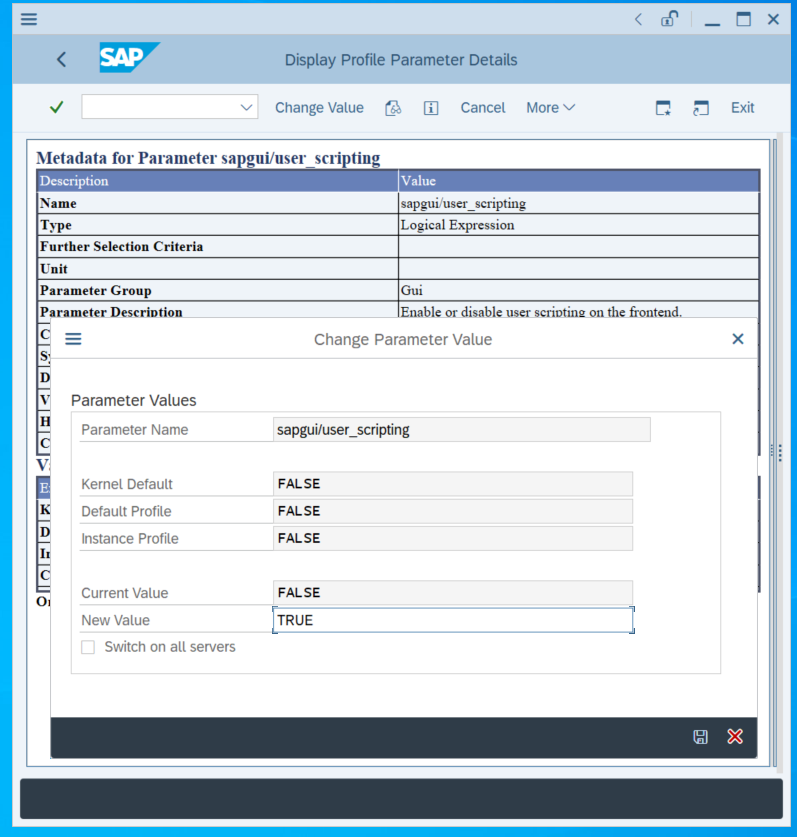 Note: You need to restart SAP GUI after having changed the value from FALSE to TRUE on server side (RZ11).

SAP GUI Scripting on the Client Side [SAP GUI]

As stated above, to use SAP GUI for Windows for automation purposes, both client and server scripting must be enabled, server-side changes are done with (RZ11). Now time to change client settings – 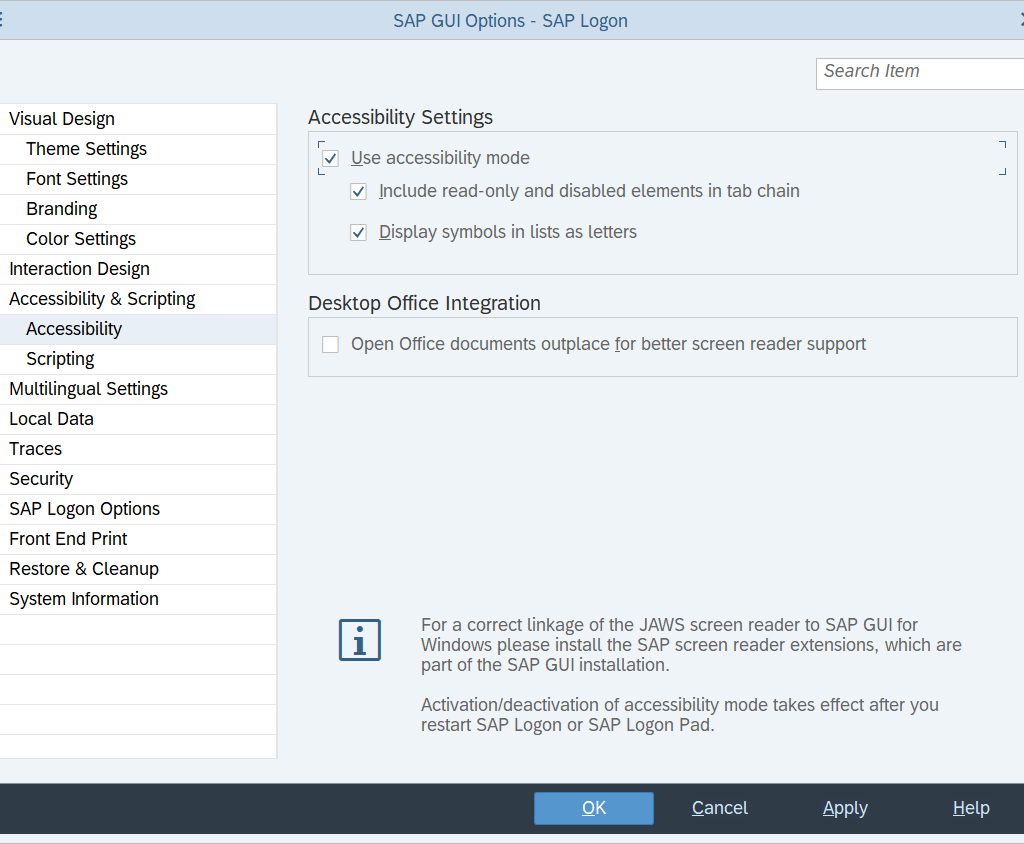 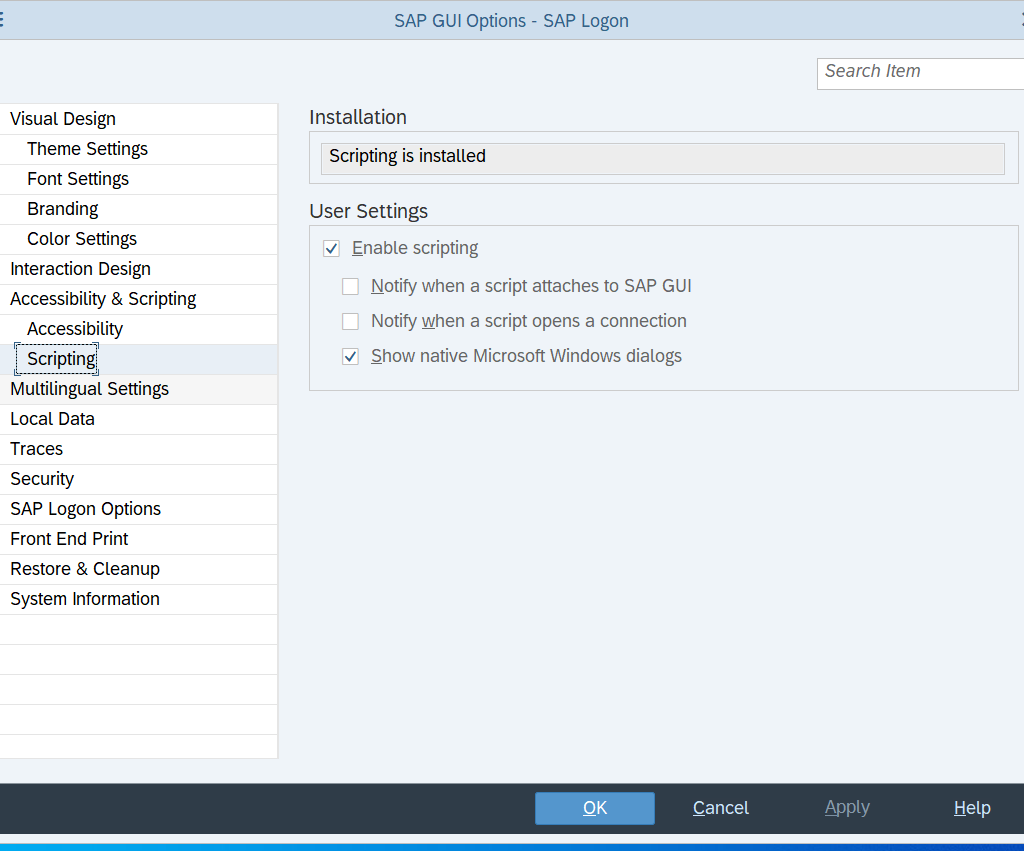 UiPath teams have recently introduced many UiPath Accelerators which helps you to start your automation as quickly as possible. These packages were formerly known as SRC Components for SAP ECC, which was built and delivered by UiPath Japan.

Read the documentation on the Accelerator here.[UiPath Foundation pack for Accelerators]

How to use Accelerators

During migration/upgrade or testing many users needs to be created,  It also requires to map them to different User-Role Assignments. This requires manual effort.

In this case, a lot of time and manpower is wasted on a repetitive task. There is also a risk of inaccuracy due to human error. Automation of this task can save a lot of time and effort, and can also substantially improve precision.

Searching for email with attachment in specific email folder

Starting the SAP GUI and logging on to SAP Instance

Record Transaction Status for Each Created User in Input Sheet. 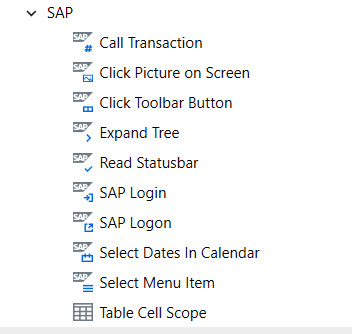 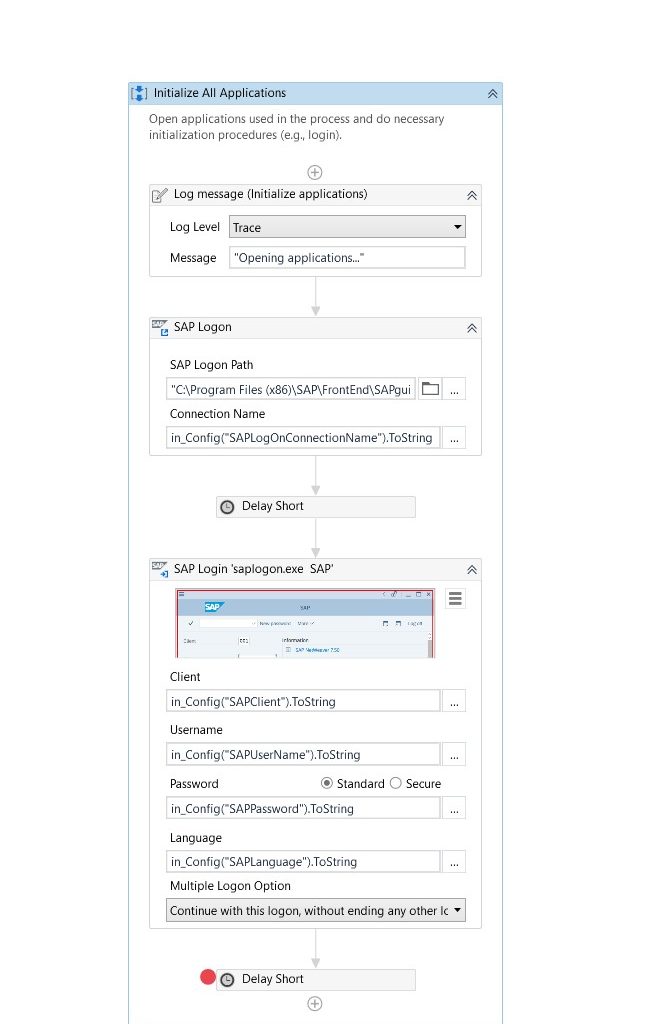 This site uses Akismet to reduce spam. Learn how your comment data is processed.

This website uses cookies to improve your experience while you navigate through the website. Out of these cookies, the cookies that are categorized as necessary are stored on your browser as they are essential for the working of basic functionalities of the website. We also use third-party cookies that help us analyze and understand how you use this website. These cookies will be stored in your browser only with your consent. You also have the option to opt-out of these cookies. But opting out of some of these cookies may have an effect on your browsing experience.
Necessary Always Enabled
Necessary cookies are absolutely essential for the website to function properly. This category only includes cookies that ensures basic functionalities and security features of the website. These cookies do not store any personal information.
Non-necessary
Any cookies that may not be particularly necessary for the website to function and is used specifically to collect user personal data via analytics, ads, other embedded contents are termed as non-necessary cookies. It is mandatory to procure user consent prior to running these cookies on your website.
SAVE & ACCEPT
Scroll to Top